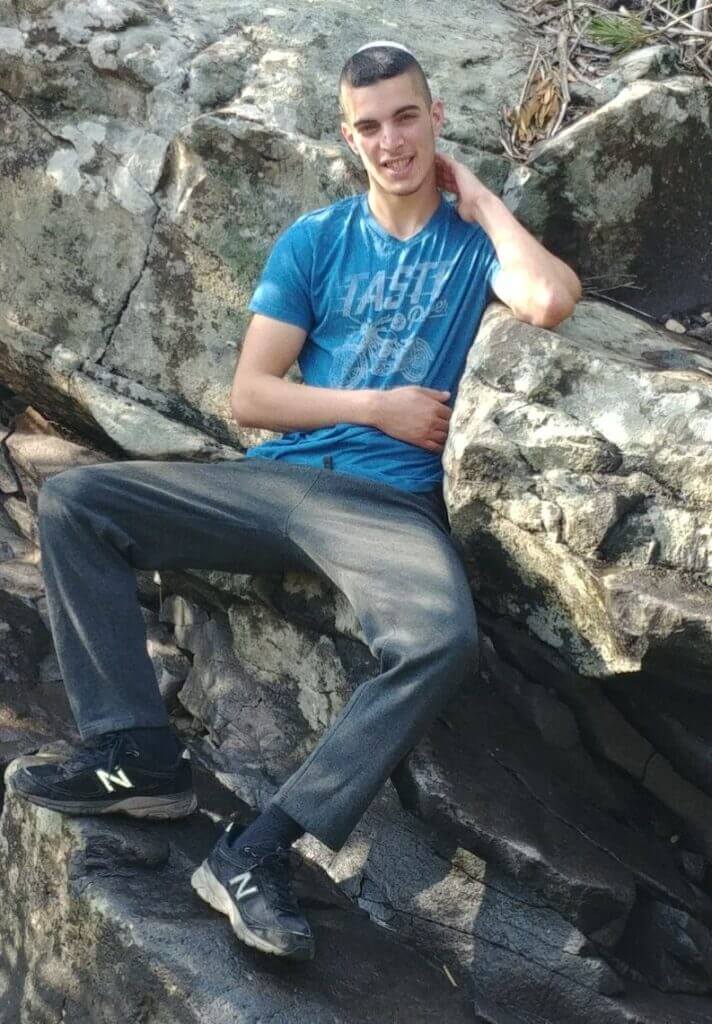 I grew up in a settlement called Beit El. When I was 14, a friend and I started going out at night and getting into trouble. We’d break into educational institutions and businesses often. We knew it wasn’t okay but we didn’t take into account the consequences. Eventually the police found out about us and caught us.

I was arrested another few times over the coming years, and even lived on the street for a year and a half because I couldn’t withstand my parents’ disappointment with me. I attended another 15 or so dormitory school frameworks, beginning 11th grade with 23 police files. Once, an IDF soldier, a graduate of the last school that agreed to accept me, came to speak. He talked about how hard his life had once been and how he had changed and become successful. He made such an impression on me that I decided I must try too.

I went to the IDF Recruitment Office and asked to serve in a combat unit, but was refused because I has so many open criminal files. Still, my Probation Officer told me, “Don’t worry. We’ll get something arranged”. I went to a court proceeding and the judge allowed me to begin the process of closing these files by fulfilling several conditions. I somehow withstood these conditions, which were a nightmare for a kid like me.

A few friends convinced me to try out Mechinat Tamir. I didn’t think it would help me in any way but I said I’d at least try. I had no idea what was about to happen. The guys were amazing, the kids were awesome, and the view was the most beautiful I’ve ever seen. It was perfect. I met Rabbi Ya’ish, who immediately gave me a hug and said there’s room for me here. He’s made of gold. My parents were euphoric about my decision.

We had a 10-km stretcher hike- my first such exercise. It was tough. I then completed Survival Week successfully and became close friends with the entire class. We then began over 18 navigational assignments, beginning with a 5-km exercise during the day and gradually advancing to a two-day, 60 km exercise. We all discovered new things about ourselves and I saw just how many ‘superpowers’ were dormant inside me.

For half a year I had no police files on me, thank G-d. By this time, I’d already severed contact from my street friends completely. And then came a week of full mental and physical breaking. It was very tough. Once I completed it, though, I understood there would be nothing I couldn’t overcome if I wished it. Nothing!

We completed the Mechina’s First-Year Program, and I signed on for the Second-Year Program with another 20 guys in our class. We received an incredible gift in the Second-Year Program: Rabbi Moshe Keinan. The year is devoted to spiritual preparation for life and has influenced me so significantly it’s hard for me to leave the Mechina. I’ve noticed I’m more attached to it than I thought. I made a huge 360-degree turn in my life here; the Mechina implements a program that really works. The word “Mechina”/preparation is truly the essence of this place. It has prepared me not only for the army, but for life as well. I leave this place with greater wisdom and determination than with what I joined, and I’ll visit here often.

You have no idea what gifts in life we gain here. Ninety percent of my personality was built here. My entire transition from youth to maturity took place here. The Mechina is truly making the world a better place.

Yoseif is from Southern Tel Aviv. He has five brothers. His parents are divorced.
At the age of four-and-a-half, the authorities decided to remove Yosef from his parents due to various domestic issues. From then on, Yosef moved between foster care families, boarding schools, and different institutions. At the age of 16, Yosef ceased all contact with his parents and today he deals with his complicated life on his own.
Yosef came to the Mechina from a boarding school in Southern Israel. At the year’s onset, he was very suspicious of the Mechina’s staff, but we quickly managed to gain his trust and he began to advance. To our surprise, throughout the year, Yosef didn’t miss a single Mechina activity. He was an active participant, and despite his hardships, he didn’t miss out even when he was given challenging assignments.
A Mechina staff member recently came across Yosef’s boarding school counselor (in which he lived over the past years). The counselor said Yosef visits periodically. On his last visit to the boarding school, the counselors were amazed by Yosef’s transformation from a violent and inverted teenager into a mature and responsible young adult with self-control who is well aware of his true talents and strengths.
As Yosef isn’t in contact with his parents, and we have no other source of feedback, we were very happy to hear this from his counselors! Today, Yosef has decided to continue on to the Mechina’s Second-Year Program. We are currently working hard on getting his delinquency record erased and fulfilling his dream of enlisting in an IDF Special Unit!.